Reaching the Next Billion Participants (Part - 1)

According to Internet.org, 85% of the world’s population has access to cellular networks, but just a bit more than 30% has access to the web. Planet Earth is a big place, and 2.8 billion people with access to the internet is a gigantic number, but it leaves roughly 70% out of reach for researchers. Or does it?

You may be looking at that stat in the wrong light. It’s cellular phones that may carry on the next wave – to suit this part of the population, platforms have been created that don’t require data connectivity.

In 2007, the same year that Steve Jobs showed the world the very first iPhone, the inhabitants of Kenya started to integrate electronic payments into their daily lives. The equivalent of nearly half of Kenya’s GDP was transferred electronically in 2012. The technology is called Mpesa. You may have never heard of it, but today, it is being used in Kenya, Tanzania, Afghanistan, South Africa, Fiji, DRC, India, Mozambique, Egypt, Lesotho and Rumania. It is a SIM-card service that does not require data connectivity. Nearly 80% of the Kenyan population is using it today to do all kinds of electronic micro transactions.

Carol Realini is the executive chairman of Obopay, a California based mobile payments innovation firm who thinks that Africa is the “Silicon Valley of banking.” According to her, “The future of banking is being defined here…It’s going to change the world.” Mpesa is a great example to show how technology needs to be adapted to make sure it suits every segment of the population. It was crafted out of the limitations and challenges of a market and it made electronic payments a reality at a time when Google and Apple were not even considering mobile payments as a profitable business.

Because mobile payments have been so widely accepted, this has also led to other initiatives. The Gramene Foundation has also developed a platform that doesn’t require data connectivity; instead, all it requires is a GSM signal. It allows farmers in remote areas of Uganda to receive critical information for their living, like draught alerts, weather warnings, even diagnostic and treatments for crop and animal diseases, via SMS.

While Facebook and Google are rethinking how to bring internet access to remote areas, leaving behind the traditional cell towers-cabling approach, it may take them a while to deliver data connectivity to these places. Radical thinking is the fuel behind solar-powered internet-providing airplanes. Mpesa and the Gramene Foundation, are using traditional SIM card services that require no data connectivity to enable millions of people to safely make and receive electronic payments and provide farmers with critical information for their crops.

It is this type of radical thinking that we need to repurpose current technologies to reach out to more people.

Should we just wait?

We have two different approaches to this challenge:

We think the latter is the correct approach. We have to learn from the Mpesa example and use current and widely adopted technologies in new and more innovative ways. In my next post, I’ll talk about why we need shorter surveys.

Some of the content in this article originally appeared in RWConnect on October 23, 2014.

Felix Rios is a Market Research Technology Manager at Ugam. He is passionate about technology and beyond the office walls, also enjoys photography.

Reaching the Next Billion Participants (Part - 1) 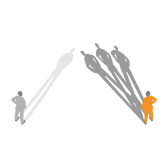 Hiring: How to attract the ‘Utility Players’ 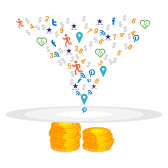 Data is the New Gold Rush 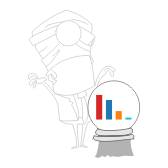 Can Google Trends Help us Predict the Primary Election Results?
×