How some retailers competed with Amazon on Black Friday, 2013

Black Friday is a critical day for many retailers and to do well they need to find ways to compete against Amazon, who has been continually pressuring retailers on pricing and assortment, combined with strong customer service and loyalty programs. Here we look at three categories to see if retailers succeeded in finding ways to stand out next to Amazon in either pricing or assortment. The three categories are:

Toys: Sports and Outdoors
The holiday season is the high demand time for toys and so it is an area of significant importance to retailers in this category. The chart below looks at Sports and Outdoor Toys to see how ToysRUs and WalMart compared to Amazon in assortment and pricing.

In assortment, Amazon carried more items (14,315) than Walmart (9,000) and ToysRUs (3,654) combined over Black Friday. The assortment gap is too large for retailers to compete in.In pricing, retailers found ways to compete. ToysRUs carried the most even assortment of pricing. Amazon had the lowest overall prices (almost 90% of their items were under $100), while WalMart had the highest priced assortment (45% were priced over $100).

Small Kitchen Appliances
This category is popular both for gift giving and as purchases to prepare for entertaining guests. Again, we see Amazon has a significant advantage in assortment, although Macy’s and Bed Bath Beyond ramped up notably heading into Black Friday.

As retailers were not able to match Amazon’s assortment, they focused on competing in pricing. Thanksgiving day saw Macy’s and Belk leading with the average highest discounts, although JC Penney had the highest selection of its assortment on promotion, and Bed Bath and Beyond had the overall lowest pricing.

Headsets
No retailer comes close to Amazon’s assortment which is approximately 2x the combined assortments of Sears, Best Buy, New Egg, Target, WalMart, Kohls, and OfficeMax. It is improbable that retailers can compete anytime soon with Amazon’s assortment.

While retailers can’t compete with Amazon’s assortment in this category, they are competing hard on discounts. The week up to Black Friday saw lots of movement and heightened competition here, with OfficeMax offering the greatest average discount at 39%.

Get insights customized for your products and market.

How some retailers competed with Amazon on Black Friday, 2013 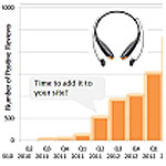 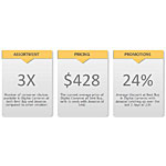 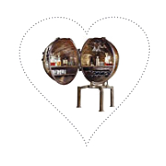